The painted turtle’s geographic range extends from southern Canada to northern Mexico, making it the most widespread native turtle in North America. The turtle is only active during the day when it spends many hours basking in the sun to regain its warmth. They stop foraging in the autumn in preparation for winter when it hibernates for periods from October to March. When winter comes adult painted turtles overwinter underwater in the mud at the bottom of ponds and slow-moving streams, and during hibernation adult core temperatures drop to as low as 6⁰C. During hibernation adults can survive for 3-4 months without breathing oxygen while in ice locked ponds. Hatchling turtles are another story, an even more extreme story, to survive the winter, hatchlings have developed freeze tolerance. Although they hatch from their eggs in early autumn, they do not leave their shallow terrestrial nests on exposed lake and river banks until the next spring when they get active, dig out of the nest and head for the nearest body of water. When frozen more than 50% of their total body water is an extracellular ice mass, this is facilitated through their use of both glucose and glycerol as their cryoprotectants of choice. The hatchlings of the painted turtle are the only reptile and highest vertebrate life form that can tolerate freezing of its extracellular body fluids. Freezing allows the hatchlings to both avoid predators and wait until environmental conditions are more favourable for juvenile development before they emerge from their nests.

Our work on painted turtles so far! 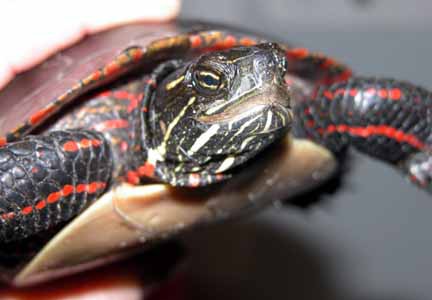